Sometimes, I get what I want from a glaze:

And sometimes I don’t. 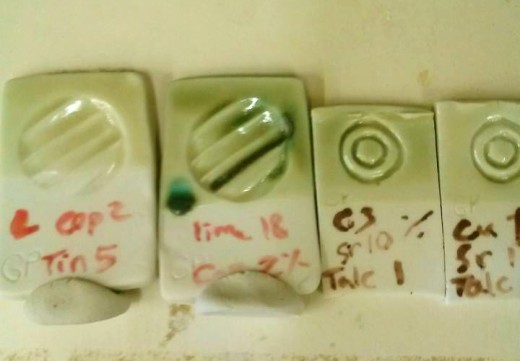 Yes, I know it is possible to obtain a beautiful blue glaze with additions of copper carbonate at cone 10 because I have two copper blue glaze recipes from the John Britt High Fire Glazes book that turn out awesome 75% of the time. They certainly never go apple green. The blue glaze in the top photo is the turquoise oribe recipe out of the book. I used to use it obsessively when I was salt firing in 2012, but abandoned the glaze after testing it in an indoor gas kiln (with 6.7% copper carb, the texture was rough and scabby). I recently decided to try testing it by taking out some of the copper. I did a line blend from 1-5% just to see if less copper saturation would make it more usable indoors. The results are awesome:

This bottle has the turquoise oribe glaze applied and fired in oxidation at cone ten– with just 3% copper instead of nearly 7%. I will definitely keep using this glaze for a while, but I really want to come up with my own copper blue recipe. The second and third photo of tiles that turned green are my tests. The strontium addition of 15% made an attractive green glaze that I might be able to use, but it’s still not copper blue. I unloaded a test kiln just this morning with similar green results. Guess I’ll just have to keep testing. Wonder if I will get blue by the end of the semester…