Alright, I know this page has been sitting quietly for while now. That’s because I’ve been hunkering down in the studio making teapots and other cool new stuff like crazy. I had a whole kiln load of teapots that destroyed themselves (luckily it was a small kiln, and the casualties measured six teapots dead). Making six teapots is still a lot of work to just throw away after the firing. I have a teapot graveyard on my top shelf in the studio. They all split their sides and/or the handle detached and slumped. I’ve had much better luck since I’ve started working with a lighter colored stoneware clay (the teapot above is what the new clay body looks like before it dries out). 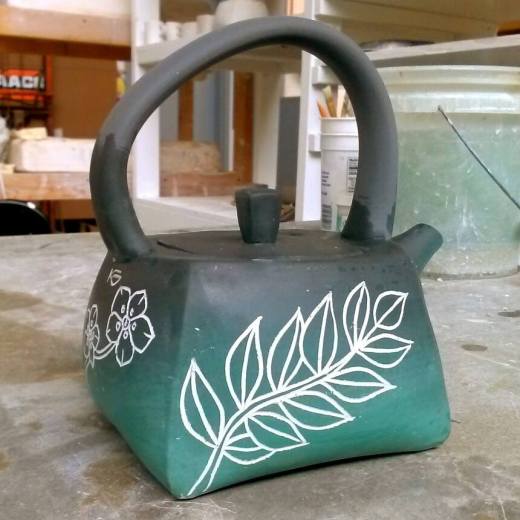 I’m really loving this new teapot design that I came up with, so I just keep making them. It’s a soft squared body with a gallery seated cut-out lid, a pulled loop handle over the top, and an intricate strainer like I’ve been taught to make over the last four years hides inside where the spout attaches. The spout is wheel thrown because I like the way it flows with the rest of the soft shape. I recently got this new turquoise underglaze in the mail, and it’s fabulous! I test fired it a few days ago and it came out a little more saturated than it looks in the picture above. I thought that maybe it would burn out or be a completely different color, but it turns out that I hit the jackpot with Laguna’s “blue-green” underglaze. It fires to cone 10, fluxes out a little bit, and stays better than true to color. I think I am in love with it. Oh, and it was under $20 for a pint of the stuff, so ya know… I’m pretty stoked.

And last but not least, is my attempt at designing an appropriate teacup shape to go with the squarish teapots I’ve been making. I also dipped back into my orchid obsession for this tea set. I decided to draw in the stem for the teapot, to make it a little more detailed than in the past (I just sharpened my tool before decorating so I was able to get really fine lines). Post-firing, this teapot will be a beautiful saturated red fading to bright orange. Who knows, maybe it will be worthy enough to enter into a tea exhibition show…

In other, non-ceramic news, I got a second job outside of the studio. I now work at a frozen yogurt lounge for a good part of the week (usually 25 hours+). The not so fun part about it is that I work nights and have to close up at the end of the day. Depending on customer flow, I don’t get home until 10:30 on week nights and 12:00am on weekends. I guess they are going to shorten the hours after the leaf peepers leave town. I’ve never had a job where I make tips before– they really add up. I took a whole bunch of coins to the bank this morning and it added up to over $70. That’s just from people ditching their coins in my tip jar cuz they don’t wanna carry them. Oh well, I found out that I don’t even need to sort them. There’s just an 8% fee to use the machine. Guess I have a little extra spending money now 😛