Gaining confidence in the Studio– IN AUSTRALIA!!

So, I do believe that I said I would kick some ass in the studio. I made good on my promise 🙂 Here is a quick snapshot of a couple of ceramic pieces– I have a few more in the process of decorating, but things take longer to dry here so it slows down my decorating process a bit. Anyway, this is a good start on a set of matching things. These slightly match the first teapot I made, but the orchids are different. These won’t be in the same set with the teapot anyway. They are much too big. I am getting anxious to get a firing under my belt here, but it might be too easy. All of the kilns are programmed by button pads. I just have to get a respirator so I can mix up some glazes. That will be the tricky part of it. I haven’t even looked in the glaze materials room yet to see what they have in supply– not to mention the variations in feldspar and kaolin. I have no idea what to expect, but I’m thinking I should take a look inside and do some research in the meantime. I really could use a few nice dishes here– I’ve just been using what came with the apartment, and half of them are plastic 😛 I do have one froggy mug I made that I brought for my french-pressed coffee 🙂

I think I did mention in a previous post that I am doing print making here in Australia. Well, here are the results from my second lino block 🙂 I decided to mix up a couple of happy bright colors. I do have that going in my favor– a history of paint mixing and color theory. Someone liked this light chartreuse enough that they wanted to use it when I was done and offered to clean it up– which saved me a whole lot of time 🙂 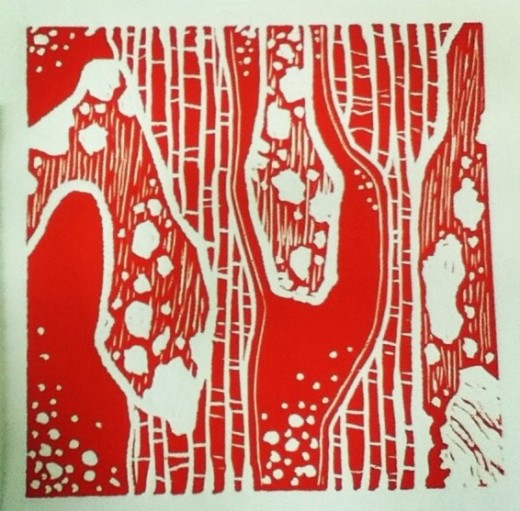 My print making teacher came over to admire this color after I printed it. Beforehand, I was getting some doubt from classmates. I told them that going bold was the best way to go with some things 🙂 I mixed a ratio of red and yellow to get scarlet. There was more yellow involved, but I knew the red would be powerful. The red, black and blue inks are nuclear. I carved this block with a starting idea of eucalyptus bark in mind– but things just grew on it… like bamboo/woodgrain and lichens and spots. I really am pleased with how it prints… I want to make another texture block with ferns– but I want to make the block bigger. I also need to think about making a few registration sheets…

When my teacher saw this (it was the first print that I took off of the woodgrain block), he told me that it reminded him of the Japanese wave prints– which is a huge compliment. He always tells us about the skill of Japanese print makers of the past. I was flattered. I really am just starting out at print making, but it seems to come natural– I’m not bragging or saying that I am any good at it. It just flows along with how I decorate my pots these days. Both image types require specific carving tools and expensive colors– the difference is that when I create designs on my pots, they aren’t reusable. They are a one-time-print sort of thing. I carve right into the surface of the pot instead of onto a printable block. I fill my lines with the color instead of coating the high points and making a transfer of the image. But really, the idea is similar. The lines are crisp, there isn’t really room for soft shading in the technique. I suppose there is stippling or cross hatching, but I think of it like a wide ballpoint pen:

There is one bold line that comes from the pen. There is no variation in pressure because the pen leaves ink in a saturated line. There can be line variation, but there cannot be gray areas. It is black and white, do or do not. There is no room for erasing– mistakes made must be worked with, and not regretted.

On a lighter, sillier note, here is a resurrection of an idea I was working with last year… FIGURE SAKE CUPS!!!

I started making figure-shaped vessels last summer while I didn’t have a wheel but I yearned to make strong forms. I was mostly working with the soft slab technique, treating the clay a lot like fabric. One day I came up with the idea of making figures to practice, but I wanted a quick way to sketch them out with clay, and I am inevitably drawn to functionality. So… what I came up with was strong coffee-sized mugs shaped like a female torso. Most of my friends back home thought they were silly– but I had people requesting them at sales after they had sold out at the end of the year 🙂 I did dig up a few extra ones at home that are still sitting on my dad’s shelves. The truth is, the handles attached to the back of them did look awfully funny. They felt comfortable in my hand and I made at least three larger teabag-sized ones, but I found that my favorite figure cups ended up being the smaller sake cups without handles that I fired in oxidation with just hints of cobalt underglaze blue fired in oxidation. They were the best thing to show up at a friend’s house with– lightweight, dainty, and they fit perfect in the hand with one finger resting in the back and one on the belly button. I only made two sake cups like them before. I ended up making 10 or so shot-sized ones that all sold out, but I didn’t grow any attachment to them personally. However, I still have both of the sake cups sitting at home next to my favorite sake decanter 🙂    The point is, they were the perfect size, and they serve the perfect purpose. Yes, there are many types of liquor cups, but for some reason, these figure cups are perfect in sake-serving size (they hold about 2-3 ounces each). I just decided that they needed something extra. My family kept asking me why I was making naked ladies… and I really had no answer for them besides studying the figure. I guess it doesn’t sound straight on for a heterosexual female to be making so many female figures in the traditional view of things, but I don’t think of them sexually. My family still doesn’t get it. Anyway, I decided to make them an even sillier concept by painting couture panties on them 🙂 I haven’t showed these to my friends back home yet, but these are sort of prototypes  😉

Oh– the figure cups just reminded me of something… tomorrow in class, we will be sculpting from a live nude model, and our professor told us that it will be a robust one. I’ve never actually had a life drawing/sculpting figure class, but I’m interested to see how it goes. It might be awkward because it will be my first time, but I’m no prude, and I plan on learning something 🙂 Back home, there is a sort of stigma against nude art of any sort– it’s a religious thing. Of course, in the studio, we have fun with rebelling against that belief back home 😉